When well-meaning women beholden to archaic traditions lovingly perform barbaric acts like holding their daughters down and slice off their clitorises with rusty blades or yank them out of classrooms to sell them into marriage, women like Nana Oye Lithur spring into action. It’s not that the former group of women gave birth to bring intentional and perpetual misery to their female progeny; it’s just that these traditions represent the way things have always been done. Better to disfigure and maim your girl than to allow her to face the consequences of promiscuity. Better to trade her in marriage to a responsible (older) man who can look after her better than you ever could with so many other children of your own to consider. Better to take her out of school early – before she crafts lofty dreams and hopes that she will never realize because she is, after all, an African girl.

These are just a handful of examples of the harsh realities that many women – particularly the poor – face in Ghana day in and out; scenarios that women like Nana Oye Lithur, Ghana’s current Minister for Gender, Children and Social Protection, have dedicated their lives and talent to changing. It is the type of work that wins you international recognition, kudos and accolades. Working to abolish harmful traditions and as well as the laws that give these customs fertile ground to flourish is a noble pursuit. It is also one that makes sense, given that the ideas about female ability and worth – rooted in opinion and nothing more – have morphed over time yielding more favorable results for women.

Nevertheless, in countries like Ghana, these notions about the inherent inferiority of women’s worth doggedly persist. A woman’s body and sexual past are fair play – or more accurately, a war zone – on which to lob attacks to score political points. Chauvinists like Ken Agyapong unabashedly assert that prominent women such as Charlotte Osei earned their positions by trading in sex. Misogynists like Dela Coffie say that champions for social equality like Lydia Forson are voices from a brothel. Jokes about raping women, violently taking their virginity, stripping them naked in public and/or beating them in the process abound, from the mouths of those who carry the title ‘honorable’ and the frustrated street sweeper alike. Mouths and minds who see women as enemies and not partners equally tasked with bettering the nation. And still through it all, women like Nana Oye Lithur have been on the forefront of this cultural fight, shutting down those who so casually desecrate the bodies of young girls and women with both the pen and the penitentiary.

She has advocated for harsher punishment for rapists.

She is a human rights lawyer and a child advocate.

She has just signed a petition asking the incumbent president to release three NDC propaganda mouthpieces who threatened to harm, murder and rape the Supreme Court judges with harm, rape and death over their handling of the case on the credibility of the current voters register. 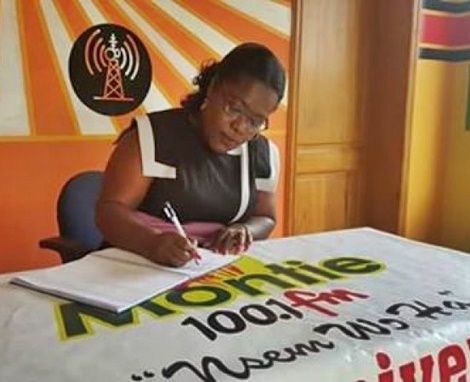 Policy analyst Dr. Charles Wereko-Brobby has called Oye Lithur’s action “incongruous”, given her background. I should say so! There are certain women who have signed this petition for whom it does not register shock. Akua Donkor is among those. Madam Donkor is the type of woman who represents the outreach field that Oye Lithur ought to be converting and bringing to the light, not following into the slimy muck. Akua Donkor is a political opportunist who uses gimmickry to give herself relevance. She is not the type of person one looks to reflect thoughtful analysis or understanding of the law. She is a tool used by the majority party to harvest votes from a large swathe of the population that has been undereducated, underserved, and underrepresented in governance. Her views about women’s rights are not nearly progressive enough. So while it is disappointing that she would sign a petition to call for the immediate release of three reprehensible, irresponsible rogues who called for the rape of Justice Georgina Wood and the murder of her colleagues, it’s not entirely surprising given the base she panders to.

But for the Minister of Social Protection to do so? It beggars belief.

Nana Oye Lithur is not an unintelligent woman, which means that there is some carrot waiting for her on the other end of this disgraceful action. Unfortunately, as does just about everything in Ghana, the general consensus is that it boils down to partisan politics, which has allowed so many women of strong repute have allowed themselves to be aligned with such a disgusting action. Among those named are Hannah Tetteh, Valerie Sawyerr and Prof. Naana Opoku Agyeman – all NDC stalwarts. The answer to your unasked question is “Yes”. Georgina Wood was appointed by the rival NPP government. Apparently, Justice Wood’s party affiliation is a scarlet letter, a stain repugnant enough to preclude her from protection under the law according to this cabal of classist women over 50.

Let that sink in for a moment.

Now we have to ask ourselves some serious questions about when, how and why we protect women’s bodies in Ghana. The village girl in remote outposts garners immediate sympathy. It’s her face, after all, that is plastered all over glossy Oxfam and Save the Children posters. Her face and her plight are a commodity that feeds and funds NGOs and line ministerial pockets. It is to the benefit of the classed gender activist to be seen supporting this caliber of victim. But how about women whose shared political values do not match your own, who draws her living from a wallet funded by the might of the elephant rather than the shadiness of an umbrella, or vice versa? Of what value and are the attacks against her? Do they illicit the same sort of horror and indignation? It would appear not. Such a woman is no ‘mere woman’ at all…she is political opponent foremost, and therefore worthy of destruction.

This is the hierarchy to determine which sort of woman deserves sympathy, protection or support in Ghana when confronted with the threat of assault, and it’s one that gets converted and altered depending on the audience. Until we can come to the conclusion that ALL women deserve equal protection under the law, we will continue to hurtle down this dangerous and divisive path that harms every woman – the vulnerable and powerful alike in the end. It is merely a refining of the vicious notions we have lived under and striven against for so long.

For the top brass in the NDC – a political party whose early leadership has on its record a responsibility for the killings of the Supreme Court Justices Cecilia Koranteng Addo, Frederick Sarkodie, and Kwadjo Agyei Agyepong – to now call on the president to pardon three media personalities who have called for a repeat of those atrocities betrays a level of disrespect that defies all reason. It is vile, cruel and beneath the dignity – and humanity – of these once-respected leaders.