I am compelled to check up on you after that amazing interview with Abyna Ansaa Adjei burst through the airwaves. Not amazing as in “stellar”, mind you. More along the lines of ‘What the heck did I just watch and more importantly, WHY is this happening????’ Have you ever seen a Chinese contortionist gently force a boiled egg into the delicate, hollow space between her legs and then violently push it out, extracting it whole and undamaged from her nether regions with naught but kegel strength. Well I have, Paul, and if you’re sitting there with your jaw slacked and your brow furrowed, bewildered as you imagine an Asian woman squeezing poultry products from her vagina, then you have some sense of what most of us were feeling after the latest edition of Good Evening Ghana aired: befuddlement.

How was this allowed to happen?

I know that this conversation is between you and I, but this is the innanets and people are really nosey. Let me just pause while I give them a quick background on what has disturbed The Force so acutely.

Paul Adom Otchere is the host of Good Evening Ghana, Metro TV’s “award winning, very insightful and probing current affairs program. Featuring high profile personalities, politicians, civil servants, decision makers and all who matter in the socioeconomic growth and development of Ghana.” On Wednesday, Abyna Ansaa Adjei – author and an NPP policy advisor – was invited to give an analysis of the NDC manifesto that was launched last week. If you are not interested in Ghanaian politics, none of this is actually important. But if you are into horror shows, the exchange between Paul and Abyna will be just your cup of tea. It’s 30+ minutes of brazen lunacy, preceded by 6 zany minutes where a “prophet” screams about President John Mahama residing ‘far in the spirit’. No, really. If you enjoy carnage, you have to watch this train slowly pull out of the station of the station, quickly crash into several obstacles and then spontaneously combust without the slightest warning. You don’t need to know what’s going on here to see what’s going on here.

There was no redeeming this segment after the introduction of Ms. Ansaa Adjei.

And Paul. I mean, you tried. When you introduced Abyna, I was ready to thumb my nose at her detractors online; people like Nana Ama Agyemang Asante who said that the NPP needed to take a closer look at those whom they chose to represent them. I mean, here was a woman who as you said is the author of TEN books, was assigned to the ministry of education, served as special assistant to President Kufour and is an alumna of both the prestigious KNUST and the London School of Economics. A woman all Ghanaians should be proud of. I was already brimming with pride. You then promised we your viewers a “surgical exercise” in the analysis of the NDC manifesto.

Chale. Paul. You don’t need me to tell you that what we were treated to instead was a butchering. A graceless, convulsive, tumultuous analytical butchering. Having Abyna Ansaa Adjei on your show was like watching the comments section of Ghanaweb come to life. She was – in that moment – the physical manifestation of the most troubling aspects of the proletariats’ contribution to the Internet. This from a graduate of LSE? They should just come and give her back her money, rescind their degree and spare all parties the embarrassment and awkwardness. Damn that woman. Now once again, I am put in a position to express contrition to Nana Ama for doubting her assessment of an issue/performance.

But back to you, Paul. I had to check up on a brotha to make sure you are okay. I saw you trying to wrangle the proverbial herd of cats. I recognized your desperate attempt to put the caboose back on the rails. I saw the horror and disbelief in your face when this supposed savant shouted “Heeeeyyyy! More vim!” in response to the one commenter who said that you had met your match in Ms. Adjei. 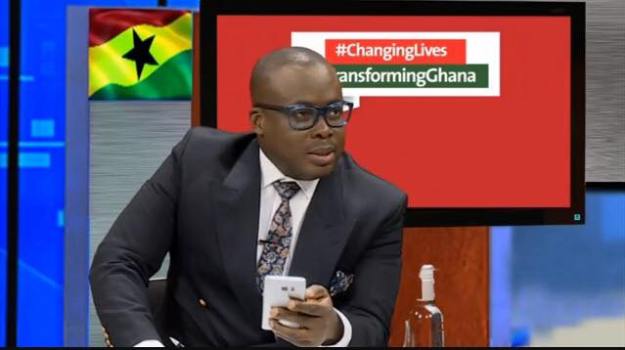 The exact moment when Paul realized that there actually may be dwarfs responsible for the collapse of the cedi and they may be living in Abyna’s house.

It’s like saying Trump is a “match” for Hilary, or like Obama Hotel is a match for African Regent, or like I’m a match for Usain Bolt just because we both have two legs. I mean, how? My brodda, I ask again: Are you okay???? 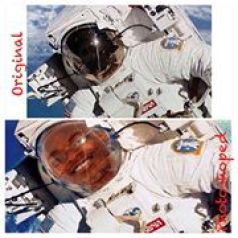 As for this one, your producer has to be blamed. He/she really needs to invest more time in screening the subjects you have on your award winning show if you want to keep winning awards. Ms. Ansaa Adjei’s performance was like watching an indigent wander off the set of Jerry Springer onto Christiane Amanpour’s show. I can’t help but recall the international disgrace that was Fauster the Fraudster. Remember him? The dude who photoshopped his face into a space helmet and claimed he won a Nobel Prize and could speak like 35 languages when he appeared on Moomen Tonight? Remember that? Don’t ever go down with banku on your face like Moomen did.

For the purpose of flattery or derision, there are some people comparing Abyna Ansaa Adjei to Ursula Owusu, labeling her as either “strong” or “rude”. Ansaa Adjei is no Owusu. Ursula Owusu would have been prepared with an actual message. Ursula would have sat up straight in her chair and actually listened to the question she was being asked. Ursula would have demonstrated cognitive dexterity and decorum. Does she come across as harsh with her facts? Yes…but at least she has facts. Abyna Ansaa Adjei came with a pamphlet, grievances and rhetorical questions like “so we should clap for them?”

And then started clapping.

Dude, look. I’ve never seen your show before. Wednesday’s edition was my first introduction to both you and your platform. I like you and for some reason, I feel very protective of you. The cold-as-ice demeanor you demonstrate while talking about politics reminds me of a friend I lost a few years ago. Like, you can smell the BS, but you’re going to let the person who brought it keep carrying it around until they eventually get tired and drop it. Don’t ever change, Paul. Okay? Don’t you ever change!

Yours now and until you screw up,

You NPP reading this: You really have to chose your representatives better. I appreciate that you want to empower women, but you sent a girl to do a woman’s job. Seriously. I’ve seen JSS 1 students explain the nuances of photosynthesis better Ansaa Adjei explained her party’s position. You guys have billed and marketed yourselves as “intellectuals”, as refined yet relatable. You’ve been marketing yourself as the party with a clear difference… and yet you unleashed this female Ayariga to speak on your behalf. Don’t make that mistake ever again. Live up to the measure and standard you’ve set. And remember: the incumbent doesn’t lose elections…it’s down to the opposition to win them. In other words, JDM/NDC just needs to do nothing to retain power unless you up your game.