President Mahama is on the campaign trail like it’s a trick or treat track and I want to know which one of you is responsible.

I know John Dramani Mahama did not contrive with these shenanigans alone. He has co-conspirators. He has collaborators. I want you to show yourselves! I refuse to believe that the Commander in Chief has taken to shopping for his wardrobe at Party City on his own counsel. Someone else is responsible for this travesty and the nation deserves to know who it is so that they can be publicly tarred and feathered. How did your father pay school fees for 18 years for you to give a whole president of the first sub-Saharan nation to receive independence this sort of reckless sartorial advice? I say show yourselves!

Or perhaps… No. It’s too fanciful a thought. It couldn’t be. Perhaps this is a decision my Dead Goat Syndrome suffering president made himself? Perhaps he alone came to the conclusion that dressing up as an Expendables reject was the way forward to winning the hearts and minds of the people of Ghana? I wouldn’t put it past him. I mean, this is a man given to gimmicks rather than implementing real solutions. Remember when the Ministry of Trade and Industry and the Savanna Accelerated Development Authority were introducing a policy document to declare the first Friday of every month Batakari Day? And then our dear president was trotted out for the cameras in his fugu, grinning from ear to ear like the World Bank had just approved another loan? It was supposed to boost exposure and patronage of Northern culture, but it fell flat for several reasons – reasons/blunders that repetitively manifest themselves in any policy implementation (or the lack of) in Ghana.

I have my own theories about why John Mahama has been treating the campaign trail like it’s perpetually 31st October and I challenge anyone to fight me on this! I believe it all goes back to this image right here: 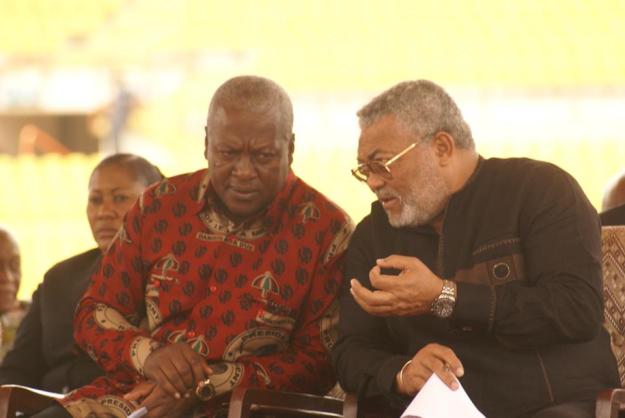 You see what former President Rawlings is doing here? You see his body language? You see President Mahama’s facial reactions to what is being said to him? Because pictures are worth thousands of words, I don’t even need to be privy to their conversation to know what was said. This picture is screaming all kinds of things at me, at you, at the world at large.

They call Jerry Rawlings the ‘Benevolent Dictator’, and I can just hear him – benevolently – saying the following:

Mahama: Oh. Massa. Why you for talk so?

Rawlings: See how your Team D ministers are playing you. At least Mills had a Team B string of aides, appointees and paraprofessionals. It’s like you went to the bottom of the sludge pool and found the grimiest barrel, scraped it and voila! Here’s your cabinet.

Mahama: That’s kind of unfair. Some of these people worked in your government too.

Rawlings: Yes! And I kept them in line! Look, we all did corruption…but I only let it go so far. Your guys dierrr. There’s a Ga proverb about hot needles and threads. You should look it up some time.

Mahama: Ok fine. I know what you are saying is true. But what would you have me do?

Rawlings: Look at the shirt you are wearing sef. Sitting up here like a broke down Nelson Mandela. Do you even have your own identity? You are asking me what should you do? Look at me. Look at me, John! What would *EYE* do? You know exactly what it takes…I just don’t think you have what Akyaa Nkrumah calls radical enough balls to do so.

John Mahama sits back, stewing over the quiet tongue lashing given to him by this lion in winter. He despises the erstwhile dictator for telling him the ugly truth about himself, and he knows he has to hit back in the only way he knows how, with the only tool in his arsenal. That’s right: Kumawood gimmicks to the rescue once again.

“What if,” John Mahama thought to himself, “What if I drew on inspiration from my book for this final run for the office of president? My First Coup D’état wasn’t about an actual coup, naturally. But what if I could trick everyone into thinking I had radical enough balls to start a coup if I wanted?”

And that’s how John Mahama’s tough guy persona was born.

See him here preparing to ride his motto like Chuck Norris going to dinner at the Ritz.

Then here again as Roadblock from G.I. Joe. 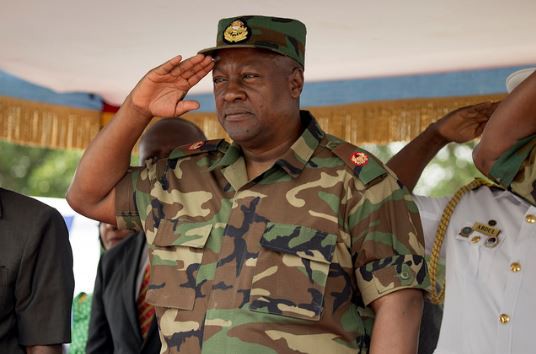 Dude. You couldn’t even get someone to embroider your surname onto the pocket flap?

And then if you doubted how bad he could be, here’s our incumbent president dressed up as Idi Amin.

At least Idi had balls enough to decorate himself with honors and medals he never earned in combat or for valor. There lines involving protocol and the use of military garb and Idi crossed all of them vagrantly. Mahama saw those limitations and settled on caution. Why be cautious now? You outchea looking like a sentinel from The Nutcracker. Go ahead and affix some pins to your uniform! If you gonna do it, DO IT, Mr. Mahama! I once had an acquaintance who decided to quit school and become a stripper in a local Atlanta club. She lived with her grandmother, who had no problem with that decision on one condition. She said, “If you gon’ strip, then you gon be the headliner.”

But in your quest to Tough Guy Presidency, you have not forgotten the people. You clearly want the penniless to join in the fun. Here you are, dressed up like Neo from the Matrix pretending to be a Sultan of old passing out “leaflets” to the adoring, desperate masses. See how excited they are to get ahold of those “leaflets”. Far be it from you to hand out money to citizens with no jobs, quality sanitation or public facilities.

I took personal umbrage with that assertion. Who do your detractors think you are? The Joker?

As for me, I believe you to be a hard guy paa. You came to the UN General assembly and gave a rousing speech, imploring the West not to force democracy on African nations. You asked them to give us time to develop our democracies, make our own mistakes and grow at our own pace. I understand why this was a critical point in the speech you made, because just last weekend, Fadi Dabboussi, author, journalist and NPP stalwart was arrested by the BNI for writing “unfavorable and critical things about the president” in his new book. Fadi has been denied access to his lawyers and communication with his family. It’s like we’re living in 1983 all over again. I bet your people are really proud. 80’s fashion is back…why not 80’s fascism? 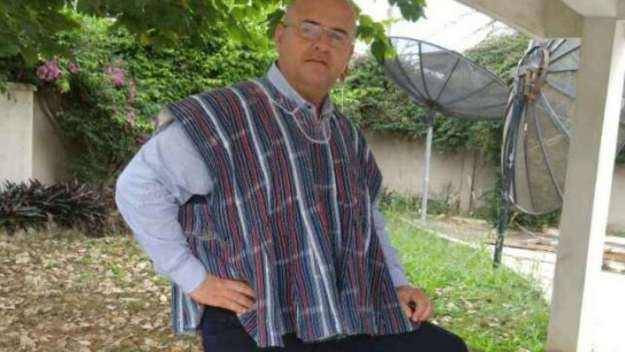 Yeah… Tough guy democracy. Kw333. That’s why as for me, I will only write favorable things about the you and the NDC on this blog. I wouldn’t want to find myself in a cell playing out some scene from an African horror flick the next time I visit home.