When I saw a former co-worker refer to Vicki Yohe as ‘Tricky Yohe’ as a result of some foolery she had allegedly executed, I bristled. I challenged him to show me evidence of what the warbler had done to earn the moniker ‘tricky’. Surely this was a case of mistaken identity! I’ve seen Vicki Yohe perform live on at least two occasions, and on both she was all sweetness and light, sprinkled with a little bit of thunder. That’s how the church likes its worship leaders – saccharine; yet ready to rally the troops to war with a melodious battle cry if necessary.

Maybe that shield maiden spirit had momentarily overtaken Vicki, compelling her to publish this meme on Instagram just a few days ago.

As if the meme itself weren’t abhorrent enough, Yohe doubled down on the disparaging posture behind it by appending her own, unambiguous thoughts, challenging those who oppose (now) president Donald Trump, his VP, his cabinet pick of unqualified dolts and his abhorrent taste in furniture by saying that they could “march all they want and protest all they want, he’s your president now!”

And then had the nerve to add a hash tag: exciting times ahead.

Exciting times for whom, exactly?

This is what postmodern, history revising Christians/Evangelicals like Yohe need to understand: This was a not a normal election and Donald Trump is not a “normal” president, let alone human being. Trump’s campaign was run – and won – on fear and hatred, which last time I checked did not constitute as fruits of the Spirit. The day after he was announced the winner, a number of college campuses suspended their classes in order to provide grief counseling for students, and elementary-aged children in with dense minority (and Muslim) populations went to class feeling a LOT less safe. In my own house, all the way in South Africa, my eldest child felt compelled to call up her immigrant and first-gen friends to make sure they wouldn’t be separated from their families in the wake of this new presidency. THAT’S the kind of president Yohe, Dobson & Co. support and helped get elected: A pussy-grabbing, tax-evading, offspring-lusting, adulterous cad who haunts the dreams of children. We haven’t even gotten to the bit where he promises to unleash ‘law and order’ (read: stop and frisk, which also happens to be a constitutional violation) on communities that are populated with people that look just like me and my family, rather than like Vicki Yohe and hers.

If you’re sitting here wondering just WHO the heck Vicki Yohe is, don’t feel bad about your ignorance in the least. Vicki Yohe is a blonde, Amish-looking woman with a decent set of pipes. Performing on Church Chitlin circuit has buoyed her career. You see, Yohe sings Gospel, or a form thereof. She’s very much given to runs, and when no one else in the industry would really give her a chance, we took her in. “We”, meaning “Black Folk”. Because that’s what we do. We are constantly extending the hand of reconciliation. We take in everyone’s orphans, fix ‘em up, encourage them, put ‘em on and then the moment they get on, they leave us for a white girl. Or in this case, a tiny-handed, anus-mouth-shaped Tang Aberration that happens to occupy the highest seat in the land.

For Vicki Yohe to suggest that Jesus is excitedly sprinting His divine self – with luggage in tow – back into the White House because godliness is hallmark of the Trump administration is not only laughable, it’s insulting. Her suggestion smacks of the sort of idiocy that has so many people disgusted with the church body at large, and it makes a mockery of God the Father, the Holy Spirit and Jesus’ sacrifice on the cross. The only reason Joshua the Messiah would be running to the White House at that speed would be so that He could bleed all over it with the hope of redeeming it; not because He approves of any the shenanigans going on in there. Now, as you might imagine, the Internet grabbed a hold of her digitized foolishness and drug Vicki for filth. I can’t say she doesn’t deserve every word of verbal chastisement lobbed at her, and when the Sable Saints drag you, it’s bound to leave a mark.

It is in the realization that she’d been marked that caused Vicki to go full Becky on us, rather than leaving it be and letting time heal all wounds. Check out her ‘apology’:

Right? You read that, right? Like, why is this in the third person? Because that coward couldn’t even craft her own “I’m sorry”! Oh, you were all big and bad when you told women all over the country – women who have survived assault, or had to comfort a friend in its aftermath, or who fear its impend for themselves or fellow woman/girl – that they could ‘march all they want’ because their voices didn’t matter, right? And then aren’t you the same woman, insulted by both your white AND Christian privilege who assured Donald Trump that if so many oppose him, he must being doing something right? Then why you running scared now? After all, you got all these people on the Internet streets opposing you…surely by your own logic… you’ve said and done something praiseworthy? But you’re scared, because now your livelihood and reputation is at stake.

As insulting as it was to insinuate that the Obama White House was devoid of God’s presence, it is even more repugnant that Vicki Yohe, through her publicist (who is clearly another white woman or a very, very young, very naive white man) would attempt to cause division among Black believers by putting the blame for her idiocy on the feet of Shaun King, a vocal voice in the BLM movement. 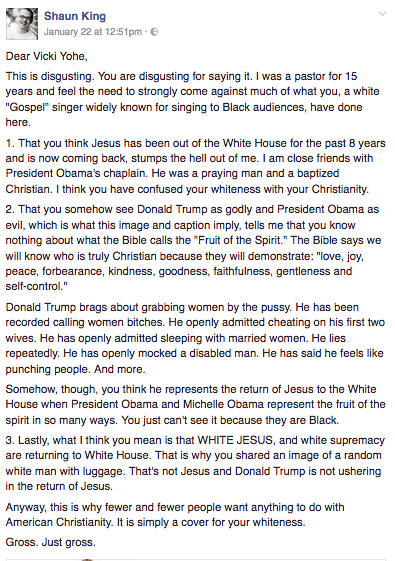 All Shaun did was read your filth for what it was. That she would now try to cause a rift between Black Lives Matter and the Black church by alleging that “they” are trying to destroy her is some slimy white damsel in distress raggedy-ness that only deserves one place: the trash can. To now ask Christians – ostensibly Black Christians – to rally behind God’s will (i.e. her protection) while putting aside their Blackness and/or womanhood (i.e. our identity) is not just mischievous; it’s cruel. More so as I have yet to see an overzealous officer/sexual deviant/oppressor alive who takes the time differentiate if a potential victim meets any of these criteria before exacting their terror. Now we are being asked to choose between the two identities for her sake? Is this ever asked of white believers? In the words of Sister Whitney Houston the departed, Hell naw!

No one is trying to ‘destroy’ Vicki Yohe. Vicki Yohe played herself. Yohe posted that meme, Yohe added her comments, and now Yohe got herself uninvited from the Church Chitlin circuit, which happens to be populated by people that look like me, and which also happens to butter her bread. That’s what’s got her shook right now. She’s staring at red in her ledger with a potential loss of cheddar.

Unfortunately for her, most people have read write through her pathetic attempt at pivoting and punting, and true to their word will never buy another Yohe album or have her invited to minister to their congregation(s) again. And yet fortunately for Vicki Yohe, she insulted the first Black president’s administration, disregarded the safety of children of color, and rubbished the feelings of women. The spirit of patriarchy is strong in the Black church, and there will certainly be those pastors who invite her back to unload her warbling alto on their members. She won’t even have to repent. All she’ll have to do is weep some pretty white tears, brood over her “trials” (never mind that they were brought on by her own doing) and all will be forgiven. The elders of the church will be called to form a prayer circle around her so that “no weapon formed against her shall prosper”; when in reality they need to be praying for the spirit of self-control to come over that mouth. They will serve as Charlamagne to her Tomi Lahren. 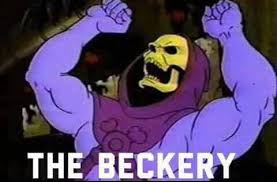 I could just vomit.

The American church – and all who emulate it – is in really bad shape. As we sit, the only two requirements needed to qualify as a godly person/government are tied up in opposing two concepts: Gay marriage and abortion.
That’s it. That’s all! As long as you oppose gay marriage and abortion, you get a cape and a certificate from the Evangelical/Charismatic movement that reads Super Saint.

However, these aren’t the only issues that are dear to God’s heart and it’s disingenuous to propose that they are when someone as prominent as Yohe says, “Barack Obama introduced policies that Christians did not agree with”. What you are saying is that the Obama administration made it easier to gain access to safe abortions and paved the way to legalize gay marriage.

But what was the Father’s mandate to Adam in the Garden? Was it not to watch over its protection and proliferation? And yet we have a climate change denier who removed all references to the phenomenon that is harming Earth. Is that a Christian policy?

Or what about when God instructed His people to ‘make the alien welcome you, for you were once wonderers in the land.’ Do Trump’s attitudes towards immigrants and his policy on immigrants sound vindictive or godly to you?

What about training a child up in the way that s/he should go? Have you seen Trump’s pick for Secretary of Education? Is this the way you want our future to go?!? 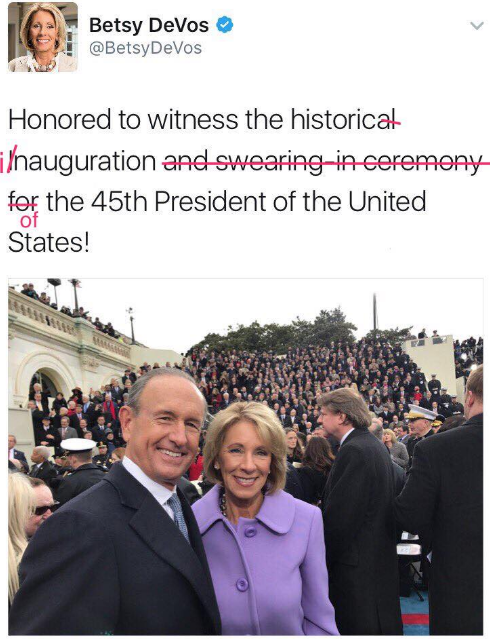 Ma’am! Vicki Yohe! Go have a seat somewhere. It’s going to take you a while to come back from this – not because of what you’ve done – but because of who you are. The Blessed Auntie Angelou said, “When someone shows you who they are, believe them.”
Today, we believe you to be Becky, Choir Leader of the Bedraggled and of the Highest Order of Messy.