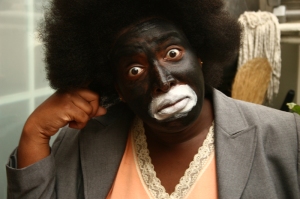 Take a good look at this face. LOOK.AT. IT! Does it offend you? Well it ought to. It offends me…and that’s my mug painted over in black-face, scratching my head in apparent confusion. The source offense is not in the paint itself, but rather from the folks that make me feel this way every time I re-enter corporate America and force me to dance a little jig I like to call “De Corprit Shuffle”. Corporate America makes me feel like a minstrel. Before I go any further, I want to make it clear that this post is not about anybody who has an employer who gives them 6 weeks a year of vacation time, is perfectly understanding and lets you work from home when your kid is sick, and has few questions (if any) when you call up and say you need the day off for a “mental day”. You live in an utopia. This post is about the 99.93% of us who live in the real world.

I was laid off almost 2 years ago, and have only passively been looking for work. News reports of hiring and job opportunities have been abysmal, and the hundreds of resumes I’ve sent out have gone out largely unresponded to.  In the last few months, I’ve decided to take a different approach. I’m going to be a lot more selective about what job I choose, as opposed to taking whatever comes along. This, I think, should keep my little African feet from being scorched on the unforgiving Berber carpets of corporate America, as I seek to do their bidding and maximize their margins.

The impetus for this paradigm shift came when I spoke to my friend Nana a few weeks ago. She and I have had very similar upbringings: We went to the same secondary school, did many of the same courses, attended elite universities, got married and have 3 kids each. Somewhere along the line, she became a director for some global conglomerate – and I became an unemployed idealist sitting at home blogging about all things inconsequential for her amusement. At first, I felt sorry for myself. By society’s definition, she would be considered a true success story and I a sorry failure. However as I thought more about her situation, I realized that she is shufflin’ harder than I ever have; and here’s why:

During her last pregnancy, she worked up until the day before she was scheduled for a c-section. After her delivery, she logged onto her laptop and worked on projects while she was still in the hospital. When she got home, she worked on emails and other action items filtering into her inbox in between nursing her baby and changing diapers (to add to the fun, she had two older kids at home to care for as well). When she got back to work 8 weeks later, her superiors asked her how her “vacation” was…and they were serious! Anyone who has spent any amount of time caring for a newborn and getting by on snatches of sleep every 2-3 hours knows that life after that is not a “vacation”. She was aggravated, to say the least. A few months later at review time, she was given a bonus that was far less than what she was expecting. The reason? Her higher-ups felt that that she was not as dedicated to her post because she had a family to look after and would leave work at 6 pm sharp every day. What these ass hats failed to realize that is is because she has such small children that she is able to leave work at 6 pm every day. She closes her office door, rejects idle office chatter, and has become more efficient in her work. I for one can attest to the fact that since having multiple children, I can mop, sweep and do dishes in a record 10 minutes as opposed to the hour it would take me when I was single and childless.  You adapt and learn to do things not only quickly, but quickly and well when you have kids.

But hey, she’s a “director”.They pay her enough money to afford a Benz and got to work with a briefcase – the hallmarks of a successful American life. Incidentally, they are also hallmarks of someone who has been shufflin’ for a loooong time.

There are few people who are strong enough to withstand the brawn of Corprit. A buddy of mine who is in the military told me that his first child (who has just turned 1) was sick with the flu and of course could not go to daycare. He was in school and couldn’t miss class – so it was left to his wife to take off from work to care for their baby. Having only been on the job for 3 months and still in training, her employer was less than sympathetic or congenial concerning her situation. They hinted that she might have to be let go for this “infraction”. She was quick to retort.

“So you’re telling me that you’re going to fire me because my infant is sick with the flu, and because I have no alternatives to provide care for her?” she queried. “Oh, and let’s not forget that I’m a military wife who is seeking to improve herself through training and solidify a future for my family.”

Smelling a potential lawsuit, her management quickly offered her two weeks to take of the baby and resume her training when she was well enough.

But you know, not everyone can flex like that. The majority of us would have no alternative but to raise our hands and

say, “You know what boss? You is right? I needs dis job, so I’ll jes’ work som’n else out.” Suddenly, some hapless woman has locked her ill children in a storage unit while she does her 8 hour shift because she has no support system and no daycare will take in her young ones. They of course can’t sicken the rest of the brood for the sake of one, can they?

Now that I’m about to have yet another newborn, I’m even more reluctant to re-enter the Cruel Corprit World, and it has everything to do with my mammary glands. Can anyone recall a few months back, Campbell Brown broke a story concerning a nursing mother’s lawsuit against an Ohio company that not only refused to give her 15 minutes every three hours to pump her milk, but also created conditions that forced her to have pump said milk in a bathroom stall?  Oh, and that’s not the worst part: the woman was fired for taking “excessive breaks”. Meanwhile, her smoking co-workers had a private entrance where they could go smoke for 10-15 minutes every hour if they so chose without

any fear of reprisal. Did that bother anyone besides me? I daresay there is no worse feeling than being summoned up to your company’s HR department, and expecting sympathy once explaining your situation to some crotchety old hag whose own eggs dried up and became dust two decades before, be told that you are being terminated effective immediately. What do you do? Do you fight? Do you cry? Do you do a little minstrel jig and offer the HR professional some watermelon and swear never to pump milk for your baby again? I mean, formula is only $14 a can, and the baby only goes through 2 cans a week…that’s only an extra $100 a month (not including your other bills). You can swing it, right? Absolutely! Especially in a country where the majority of all fathers are unconcerned and uninvolved in the upbringing of their children. Who, if they do pay child support, pay a mere pittance…say $72 a week?

I’m sure that men must suffer through their own version of De Corprit Shuffle…but I’m not a man and I cannot speak to it. I would still argue that professional women with families have it far harder than their male counterparts. When a child gets sick, she is expected to stay at home and play nurse, not he. When there is a bake sale at school, she is expected to show up with the confections and raise some money; rarely he. When a child isn’t reading at grade level, she has to schedule time off from work for the parent/teacher conference to discuss the child’s failings. If said dad does show up, he’s praised as an “involved parent”. If she can’t show up, she’s reviled a “bad mom”.

Man. It’s hard out there. For all you ladies doing De Shuffle: I salute you. If I do go back, I’ll need a new pair of heels. You can’t shuffle effectively in flats y’know.

This article has 13 comments