I trust that the Ghanaian elections are close enough that this post will not sway one voter one way or another. The candidates have all made their speeches, presented their proposals, and the die-hard party faithful for CPP, PPP, NDC, NPP and Ayariga will turn up to vote as they always have: along party lines.

As an interested observer who does not have the right to vote in Ghana (yet), I want to throw my support behind one candidate in particular – and that’s John Dramani Mahama.

John Mahama was the Vice President and assumed the presidency after President Atta Mills died in July of this year. Mills was a good man, who had the nation’s best interest at heart. He just didn’t have enough vision to propel the country forward. He is the first sitting president to die in office. As Ghanaians have always done when faced with the unknown, we conducted ourselves with dignity and grace and swore in a newly minted leader. It was like trading in a reliable 1963 VW Beetle for a shiny new Range Rover. Were we sad to see President Mills die in what was ostensibly the prime of his life? Sure! But we got a way hotter president in return. 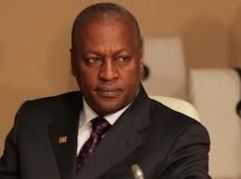 I’ve said before that if Mr. Mahama could only harness the power of all that magnetic allure and transform it into sound socio-economic policy, Ghana would be competing with the West for space on the moon. However as it stands, he and his party are offering the same old tired solutions and promises to the Ghanaian citizenry.

Let me be clear: this post is in no way an endorsement for NDC. The (P)NDC has a violent history that has done Ghana’s economy tremendous harm. It has long been run by thugs and sycophants who take pleasure in looting the national coffers and destroying the lives of others. Not many of us will forget Rawlings’ firing squad and the brutality he meted out against civilians simply because they had the fortune to have “two toilets” in their house. NDC sucks as far as I’m concerned. However, I AM saying that John Mahama, who has been blessed with extraordinary hotness, has a unique chance to change both his party’s and his country’s image through that mega-watt smile and authoritative countenance.

This is a chance for Ghana to usher in a new era of glamour and change history for the better. If Mr. Mahama would seize the opportunity to introduce bold changes in the nation, it would a dream come true that I never thought I’d see in my own life time.

If my iPhone is telling me correctly, we’re about to enter the year 2013. However, a quick promenade through any major city in the country belies that fact. We are still relying on architectural structures dating back to pre-colonial times. Our water and sewage treatment systems (where they exist) are dilapidated. Raw sewage literally seeps through the land, with massive open gutters carrying feces, plastic, the occasional dead dog and slime throughout parts of the metropolis. Since the advent of sachet water, you would have thought that some government official would have considered the environmental impact of all that plastic littering the land, given Ghanaians’ penchant for poor waste disposal. One of the saddest things I’ve seen in Ghana was the veritable landfill that has sprung up on a mountain slope in Larteh. Blink and you’d miss it as your car bumps along. However I got a good view of it when my dad stopped to buy palm wine. I don’t think the villagers are happy at all with having their land literally crapped on, but their elders and government officials have taken their bribes and allowed it to be so.

John Mahama can change all that by leading by example. If he would only emphasize a “Healthy Ghana” portion in his “Better Ghana” agenda, a lot of our problems would be solved. A lot of diseases we grapple with could be diminished, even eradicated if only we would update our structures. For example, we know mosquitoes –who bring malaria – need standing water to breed. Why then are their clouds of mosquitoes dancing on pools of water where people live and work?  Is the idea so far-fetched?

And how about introducing some standards in, oh…I dunno…every industry? Dozens of children are poisoned and die each year because they mistake kerosene for a soft drink. How do they do that, you ask? By drinking kerosene from a Coke or Fanta bottle that some adult poured in there. I can’t drive up to my local Shell gas station with an empty jelly jar expecting petrol to be inserted inside. I’ll be flatly refused service. Neither should Clement Bimpong in Any Village, GH be able to approach his local kerosene seller expecting to top up in his reused Voltic bottle. We can introduce (or impose) standards, and we should.

These things are not hard. You know what is hard? Getting Ghanaians jobs. You know why? Because our government has no faith in us. Do you know how many Ghanaians graduated this year alone with degrees in architecture all over the world? Neither do I, but I know three who graduated with honors in that discipline. Why haven’t they or their counterparts been tapped to bid on major building projects in the country? I believe it’s because virtually all of our politicians, regardless of party affiliation are so self- loathing, lazy and stingy that they project that negative self-image on others. They can’t believe that any else has Ghana’s development at heart because they themselves don’t have Ghana’s development at heart. All boats rise with the tide.

Jobs are sexy, Mr. Mahama. Better than free education is the freedom to choose where your kids go to school. Give Ghanaians purchasing parity by giving us our land back. Have you ever seen a group of Ghanaians marauding the rice paddies of China with machine guns? Why then are throngs of Chinese thugs guarding cocoa farms with rifles, preventing farmers from working their ancestral lands? Because a chief got a crate of beer and a Kia in exchange? Arrest the chief for defrauding the nation if you need to! Let me tell you something about the Chinese sir: they are like a bad rash on your bum that never goes away. You’re too hot to go to bed with that sort of blemish on your smokin’, smolderin’, fine body.

Forgive me. I got caught up in a vision.

Like I was saying, Ghana has a real shot of making a name for itself beyond verbose prose and pretty tourism pictures. Get our beaches cleaned up and remove the toxic waste. Start reversing the damage that has been done to our forests and rivers now, before the effects are irreversible. What we put into the food chain is what we eventually feed ourselves. Invest in science and technology for Ghanaians by Ghanaians. Be the first president to show that you actually, truly believe in the intelligence of your people. I know that politicians take us all for fools, but really we’re not. We’ve been waiting for transfigurative leadership and I think that you could be it. I heard you speak on local television here in Atlanta. I was beyond impressed. Your tenor voice was auditory ecstasy. Maybe in a different time, under different circumstances, you could have read the phone book to me as I snuggled my head into your broad, heaving chest…

Do you know what poverty is? It isn’t living in mud huts or not having a car. Poverty is the inability to use what you have to get what you need. No matter who wins the election on Friday, we need to hold them accountable to the promises they’ve made. None of the promises are so extra-ordinary or compelling that they are beyond reach outside of the office of the president.

And no matter who wins, I will forever remain in the consortium of the Mahama Gurlz.