I don’t watch football too often, but when I do, there is a moment in each game that I live for. It’s when the referee frantically trots into the middle of the field whistle lodged between his chapped lips with a burn in his eyes. He throws a flag. I think he grabs one of his wrists – I can’t say for sure, because I’m always waiting to hear the words that make my soul titter with glee. He looks in the direction of the camera (but never directly at it) and says “Unnecessary roughness. Five yard penalty. Blah, blah, more football talk”, and then trots away.

This is football! The entire game as an enterprise is unnecessarily rough! Now we’re going to penalize men for what they are being paid to do? It’s that absurdity that gives me so much mirth.

There are other absurdities that amuse me as well: Dogs on tricycles; 60 year old men in Speedos; this enduring rivalry between Africans and African Americans. It is the latter that we’ll be talking about today, if you haven’t guessed. My friend Edith refers to this latest incident between the two factions as “unnecessary tension”, which sums up the matter quite succinctly.

Africans and African/Black Americans have a long, tumultuous history together, fraught with passion, hatred, admiration, scorn and not a little pity for one another. After returning from Zaire (now DRC), Mohammed Ali was asked how he felt about his experience in Africa. He replied:

“Thank God my granddaddy got on that boat.”

When my mother was a young woman feeding her wanderlust, traipsing around West Africa in the ‘70s, she told me about a time she got into a taxi and struck up a conversation with the driver. Deciphering her accent, he said “Oh! You’re an American!” She replied that she was.

“Then you are a slave,” he said condescendingly.

“Well, YOU sold me!” she shot back hotly.

She never told us what the outcome of the conversation was, but knowing my mother, I doubt it ended in dignified, stony silence. I imagine she finished dressing the driver and hopefully refused to pay him.

These incidents – marked by one group’s assumed superiority over the other -took place well over 30 years ago, and as an African-American hybrid (i.e. half Ghanaian and half American), I am often baffled by how little these attitudes have changed 500 years after the first black slave was shipped off to the New World. Since my mixed heritage makes it impossible for me to pick sides, I have chosen instead to point and laugh at the tension makers, like Gary Hardwick, who still have not come to accept that you cannot separate the Black African experience from the Black American experience. We are bonded together, whether we like it or not. We might as well learn to like it.

Gary Hardwick is an African American producer and screenwriter who recently penned a piece on his blog condemning what he sees as the African invasion of Hollywood. 2013 was an excellent year for Blacks in film. The Butler, 12 Years a Slave, and Long Walk to Freedom are just a few of the films that won critical acclaim for both content and execution. This is the moment many of us have been waiting for: when we’ve had the chance to compete, be seen on screen and afforded accolades for playing something as something other than a gangster or a maid/slave. Mr. Hardwick’s lament, however, is that the persons receiving the accolades in modern Hollywood are Black – sure – but they are solely of African descent. He goes on to imply that the African image/personality is easier to honor than that of its American counterpart and provided this meme to illustrate his point. 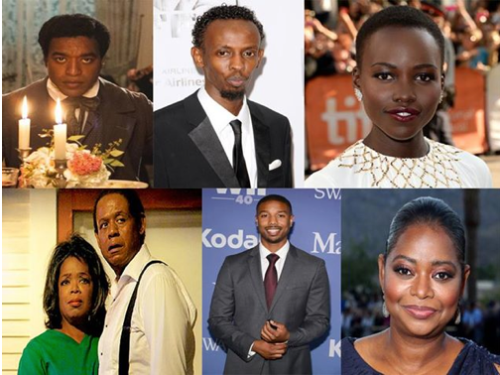 You see, when dark skin is linked to the legacy of slavery, murder and oppression, it makes certain people feel bad, guilty and dare I say, afraid. And in this happy ass age of false perfection, no one with any affluence wants to feel bad for one second about anything, ever. So, a dark Indian girl is preferable to a Black American woman, a British black man is not so worrisome as one born here, or a Black American descendant of slaves is worse than say, a half-white descendant of an African national who was raised by white people in Hawaii.

This is where the “unnecessary tension” is borne. In his attempt to other Africans, he has blinded himself to the reality that our shared blackness is our shared struggle. No one watches 12 Years and thinks to themselves “Wow, that Nigerian played the HELL out of that role!” There is nothing about Chiwetel Ejifor that makes him anymore distinctly African or African American than Kwame Brown, not counting his birth certificate.

When I was in South Africa, I was treated to all manner of disapproving stares and disapproving looks when I walked into certain establishments. I have dark brown skin and natural hair. It wasn’t until I opened my mouth that I was then treated to a certain level of courtesy. I could literally see the cloud lift from the faces of restaurant managers and clerks. “Ah! This is a Black American! She’s not like the others. She’s ok.”

While in transit in Germany just last year, I made an acquaintance in the airport who was travelling with his brother and father-in-law from Liberia. They were returning to Michigan. We struck up a conversation that lasted the entire five hours of our layover. As we stood there talking, a blond woman with really (really) bad roots bounded up to us with the most sincere grin on her face. Her green eyes were twinkling. I remember them because they were boring into mine.

“It’s SO good to hear American!” she gushed.

My new friend and I smiled back and offered her a courteous laugh and nodded politely. We had no other verbal reply, however, knowing that she would never approach us in the middle of the mall in say – Washington, DC, proclaiming how good it was to hear us speaking in our natural accents. Would she feel the same way if she knew I was only part American? That I, in fact, identify more with my Ghanaian roots than I do with my American ones? I don’t know, and I don’t care, because when I walk in a door, people don’t see a woman coming, they saw a BLACK woman coming; and until I’m given reason open my mouth and speak with eloquence, that’s usually the end and the beginning of it.

I say all this to say that Mr. Hardwick is creating much ado about nothing, and for no good reason. Much of the world cannot distinguish between an African and an African American. I often think that we might do ourselves a true service if we took on the same “color blindness” with which the world views us. His gripe is baseless. After all, how many African Americans have portrayed Nelson Mandela in the last 20 years? Are our histories not shared? Can either of us be complete without the other?