Thank God for White privilege. No, seriously. Without White privilege, there is absolutely no way the likes of Cliven Bundy, Donald Tokowitz Sterling and ‘Mindy’ from this Tmbl’r account would ever make it in this world. I look at people this and see the wonder of privileged grace and mercy working in their lives – for without it, certainly these individuals would exist as little more than an amalgamation of bipedal pond scum.

I think Mr. Bundy is probably the least racist of the lot, so I’d like to begin with his statements which inflamed passions earlier this week. On the subject of Black people in America, he says:

I see. Never mind those pesky laws that have historically criminalized Black existence (vagrancy laws, Pig Laws, Jim Crow, Stop and Frist and whatever else they’re going to dream up in the American Judiciary in the next 15 minutes), WE put our young people in jail? And when were we supposed to be “having a family life” as slaves? In between the time our fathers and brothers were being tortured and hung, or when our children were sold off (or used as gator bait) or when mothers and daughters were being raped by egocentric masters and wicked overseers? And he talks about abortion?? Well, we have Ms. Sanger to thank for that, don’t we? Wholesale abortion of Black babies isn’t something we dreamed up in our communities, was it? It was the privileged majority that was frightened us darkies were gonna use up all their precious resources; therefore our numbers HAD to be culled.

Of course, Cliven Bundy has a very different interpretation of history, going so far as to say Martin Luther King, Jr and “Rosa Park” would agree with him.

My favorite part of the interview is when he asserts that if he can’t say “niggro, black boy or slave” then MLK didn’t do HIS job, because HIS right as an American is to get to say whatever he wants! Freedom of speech is his right! Sorry Cliven. I’m sure Dr. King would have gotten ‘round to that had he not been assassinated by *whispers* a White guy.

Mr. Bundy says he’s not a racist, and I believe him. He’s just a moron. The fact that he doesn’t (or can’t) differentiate his stealing from federal lands by allowing his cows to graze without paying any fees and taxes from a needy family on public assistance is telling. How is he a “patriot” and the poor Black mother on WIC a scourge or society when both are surviving on the public dole? He’s a patriot because his white skin means was born to privilege!

Did you see the video of him and his supporters in the field with guns drawn in a down with federal agents? Let a Black rancher try that – if you can find one. It would be over in minutes.

Well wrap it up and hippity hop on outta here!

Before Mr. Black Rancher could get a word in edgewise he’d be shot dead, because the agents felt “threatened”. And don’t try to tell me any different. Remember Rambro? The Feds couldn’t wait to set him alight.

But all this is hypothetical. Let’s get into some real, actual, bonafide in your face racism. By now, you’ve no doubt heard the 9+ minute audio of Donald Tokowitz Sterling berating his girlfriend for taking pictures with Blacks and inviting them to games. This is crazy for a number of reasons:

Dude, how are you a racist when you lived through the Holocaust? You are old enough to know that African Americans went over to Germany to free your people, and chances are you’ve met a few! And now Blacks aren’t good enough for your Black girlfriend to associate with or put on her Instagram account?

Obviously, people are all atwitter because of the blatant racist remarks he made. My concern is about something a little more subtle and much more disturbing: his penchant for exoticising his girlfriend  and expectations of submission. 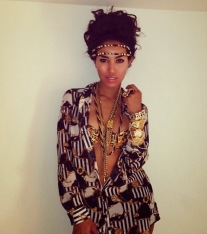 Mr. Sterling’s girlfriend, who simply goes by V. Stiviano, is racially ambiguous. You really can’t tell “what” she is when you look at her. He therefore took it upon himself to define her as Latina, and to conduct herself as such, conveniently forgetting that she has Black African DNA swirling all up in her bloodstream and ergo producing a very fine pair of plump lips.

This is the portion of the conversation that had my jaw on the floor.

DS: Yea it bothers me a lot that you want to broadcast that you’re associated with black people. Do you have to?
VS: You associate with black people.
DS: I’m not you and you’re not me. You’re supposed to be a delicate white or a delicate Latina girl.
VS: I’m a mixed girl.
DS: Ok well.
VS: And you’re in love with me. And I’m black and Mexican. Whether you like it or not. Whether the world accepts it or not. And you’re asking me to remove…. you want me to have hate towards black people?

Exasperated, he goes on to reduce her by snorting that she’s just a “fighter”, wondering who would want to be with a woman like that, and imploring her to “understand” him instead of fighting him on the issue. V. responded – and very calmly and rightly too – that she did not understand.

How could she? He’s talking craziness! And let’s not forget that. She’s. Part. Black. She’s good enough to sleep with but…

Speaking of crazy people, that brings us to ‘Mindy’, curator of the Tumbl’r account Social Justice Mindy . I was all set and ready to celebrate People Magazine’s declaration that Lupita Nyong’o as Most Beautiful on their cover when Mindy told us all not so fast! How can she believe that Lupita is beautiful when even BLACK men say she’s ugly? She rails against the assault on White beauty and femininity saying:

The media wants white women to be ashamed of themselves. And it is time to stop that. Everywhere I turn, i see black women stealing white men, like thieves in the night. I dont mean to be racist but honestly sometimes I wish we could go back to segregation.

What? But wait. The best part is when she adds “I’m not a racist. I think black people should have the rights we give them and should keep them.” 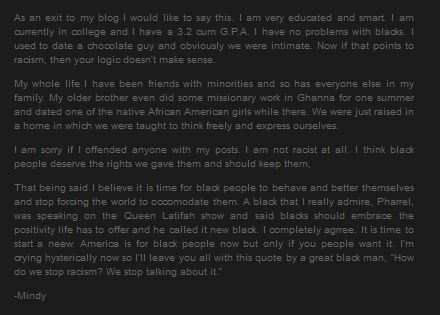 Hauex, have several seats. Black people weren’t given any rights. We bled for them.

I’ve saved the best for last though. Nothing gladdens the heart like a friendly visit from your local Grand Dragon of America’s original terrorist organization, the KKK. 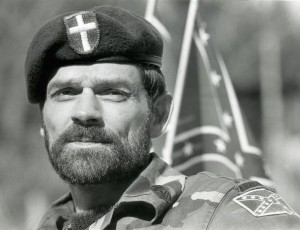 Frazier Glenn Cross, Grand Dragon and former leader of the defunct North Carolina-based White Patriot Party (formerly known as the Carolina Knights of the Ku Klux Klan) was caught this week in the back seat of a vehicle with a transvestite prostitute in a very compromising scenario. A BLACK transvestite prostitute. With twigs, berries and curls. The details are so graphic that the DA won’t release them, asking rather that people use their own imagination and judgment to discern what happened.

As Mr. Cross said in his testimony, he intended to lure the prostitute to his car to beat “her” up, but one thing led to another and…

And, well. There you have it. The Klan coat of arms merely instructs its followers to “screw Black people”. How each member interprets that mandate up to the individual! Who are we to judge Grand Dragon cross for taking this mandate literally?