The kids are not allowed to watch TV during the week, but sometimes, when the noise level is more than I can bear and the constant bleating of the words “But we’re so boooooored….!” is more than I can abide, I allow them one small indulgence.

The children readily agree and rush up the stairs. For an hour, the only sounds I hear are “eewww!” and the occasional, incredulous “what?!” followed by a loud gasp. These noises satisfy me. They assure me that my children are being educated – or informed, at least – about the scientific world in ways that I am ill-equipped to do. But after watching this Maury-esque NatGeo Gone Wild video, I’m not sure that this is the best diversion for my offspring at this tender age. I don’t know if they are ready for this sort of mature material!

A fight breaks out when a husband comes home and finds his wife with another penguin. pic.twitter.com/9ejYGcJ5TJ

Holmaighat. Did you see that? This is just brutal. Just absolutely horrible. To quote the Blue Lives Matter corps, we can’t rush to judgment because we “don’t know all the facts”. As the Internet has pointed out, perhaps the cuckolded penguin was actually a poor provider or was abusing his wife in some way. Maybe he even had a second family in some other burrow that she found out about. Maybe – as the fight between her betrothed and her new boo revealed – she sniffed out a long time ago that he was too weak to be a model of strong, prime penguindom for the children she has to raise. All we know if is that the man went out to make some bacon and when he got home, some other guy was porking his wife.

2 weeks ago, we travelled to Oudtshorns and visited the Highgate Ostrich farm. We learned about how ostriches choose their partners. Instead of forcing a pair of ostriches on each other, breeders will release a male ostrich into a pen of five females and let him choose his mate from among them. If she precedes him in death, he will never mate with another ostrich again. However if HE dies, she immediately begins the process of looking for a new mate. Penguins are reported to share similar family values, where couples remain monogamous and committed, sharing responsibility for hatching and raising their young in a manner very much like ostriches do. I had this elaborate piece made up in my mind about how a (human) woman ought to choose her mate based on the qualities of the ostrich: One who is caring, committed for life, equally shoulders the burden of raising young, able to protect and provide…

This male ostrich stands guard over his clutch while his mate feeds in the distance.

I had this elaborate, unwritten piece in my head where is marinated for days, forgetting one fundamental fact: Some chicks don’t want a sensitive dude. Some chicks see a man who respects them as an equal as weaklings. Some chicks are just evil hoes.  Ohhhh, and make no mistake: Mrs. Penguin is. An. Evil. Hoe. She has to be.

Did you see how the two embattled males stood there crying out for her to choose between them, and how she waddled over there, inspected the reproductive plantain of the penguin she was cheating with, ROLLED HER NECK AT HER HUSBAND, and nudged Rico the Home Wrecker with her beak in the direction of their den of iniquity before waddling back to the crib? This she-penguin has no decorum, whatsoever! She could’ve let her husband down gently. She could have let him leave their marital home with some dignity, but no! She not only robbed him of his burrow, and his children, she robbed him of his pride. She ain’t have to do that. But honestly, the way she finessed her husband with such nonchalance and savagery, I don’t know whether to slap her or shake her hand. Is she heartless or brilliant?

@TheSimAisle @NatGeoChannel she was wrong for that. Rolling her neck at him.

This was more than he could take, and in a valiant effort to reclaim his self-respect, he chased after the man who’d broken up his home – the man whom his kids had been calling ‘Daddy’ for only God knows how long – to launch one final brutal attack in order to prove that SHE had made a fatal error in rejecting him.

And man, was it brutal. Mr. Penguin left bloodied and half dead, while Rico Penguin lunged his massive body deeper into the burrow his sweat and bare beak built.

Holy Ghost Fiya!!  Why did he have to trip over the tree branch after he caught hands from Rico the Rival Penguin? I blame 2016 for this. Only 2016 is capable of something this cruel. 2016 stuck out its malignant, twisted foot and tripped Mr. Penguin as he prepared to take his walk of shame.

@NatGeoChannel loses the fight, his family, then trips on the way out nooooooooo pic.twitter.com/86lsmYFAWi

The sad part is, there is nothing Mr. Penguin could’ve done to prevent this outcome. Furthermore, his reputation as a punk is sealed in the community. Everyone saw this…everyone. He will never mate again – at least not in that community of penguins. He’ll be lucky if he makes it to another colony, bleeding the way he was. Predators – like rogue police in communities of color – will view him in this weakened state and see it as an opportunity to rob him of his civil liberties and right to life. It’s inevitable. And then it will be incumbent upon us to start a penguin lives matter movement to honor this unjustly slain life. It’s the decent thing to do as co-citizens of the earth. RIP in advance, Mr. Penguin. I’m sure you were a decent bloke. 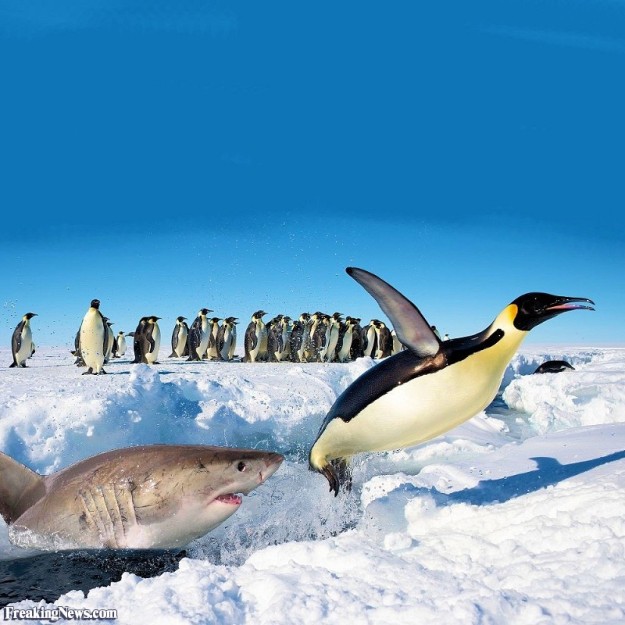 Herh. Lemme tell you something. If you’re human and male and reading this, be grateful that more women do not conduct themselves like birds. Now might be a good time to make sure everything is alright in your mammalian relationship. You don’t know when the spirit of Penguina will overtake your wife.