I was only supposed to stay one hour – but that was before my first sip.

This weekend I was invited to a bridal shower in honor of my ex co-worker’s bride to be. (This would be a good time for me to mention that miracles do indeed happen when it comes to finding a mate. How he snagged a woman of such sophistication and class is beyond me. He is gauche, and has the erudition of an 18th century English street sweeper and she has the charm of a well-bred socialite. Instead of considering himself very lucky, he attributes his success to mastering the art of ‘game’. Right.) The venue was a quaint shop called WineShoe, just on the outskirts of downtown Atlanta. The floors, decorative ceiling and massive doors were made of varying wood blends, including pine, oak and a bit of mahogany…but I digress. What important for me to share with you is was why we were there…which was to drink wine!

Rasheeda (the bride) arrived looking very chic in a gold strapless dress, purple stockings and nude shoes. Whenever there is a gathering of Black women over a certain age (that age being 26), appearing in impeccable make up and stylish fashion are customary for every attendee. Fortunately, this was my birthday weekend, the kids were gone, and I actually had time to devote to completing these two obligations.

So back to the wine. There were racks and racks of the stuff everywhere. As I rule, I don’t drink – but I felt an obligation since this was theme and point of the event. After much arm twisting, which comprised of the owner pointing me in the direction of the table with dainty glasses filled with bubbly, I took my first sip and relaxed. Eager not to make too much of a spectacle of myself, I did my best to compose proper sentences and engage in lady-like discourse. I succeeded in not guzzling down my drink… But then I looked across the room and saw that another guest was on her third glass. Well heck – why not get one more m’self?

How many glasses we had collectively escapes me. The owner, Nora or Shannon, or whatever her name was – she had brown hair – would walk around and top up our glasses after describing the bottle. There is a white one that the Pope likes to drink with fish, a sweet red called Kiss Me or Touch Me (I can’t recall because I was too busy drinking ‘Me’) and a sweet white wine made by Seven Sisters. Seven Sisters, as it turns out, is Rasheeda’s favorite brand of wine; so favored that her cake was baked in the shape of a wine bottle and emblazoned with the Seven Sisters label. It was therefore incumbent upon me to sip upon this preferred vino, not only because it was the feted woman’s favorite drink, but ALSO because it comes from the only vineyard 100% owned by women from South Africa, and Black women at that. We have to support the sisterhood, don’t we? 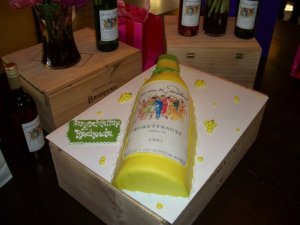 Nora/Shannon then gave a demonstration on how to open a champagne bottle that was saturated with innuendo.

I couldn’t hear what she said next, because everyone in the room was cackling so loud. A few seconds later I heard a loud “POUHP!!”, she was smiling, and we were clapping. She offered this technique to Rasheeda as a ‘tool’ to keep her marriage a happy one.

Three hours later (remember: I was only supposed to stay an hour), I left the festivity… not quite staggering, but calculating every step so as not to appear staggering.  Perhaps the best part of the party, other than watching Rasheeda open her gifts, was the roundtable/advice session from all the married women. There were divorced women, women who’d been married a few months, and women who’d been widowed. Having patience and keeping God first in your marriage were the most popular tips. But it was the widow who gave the best advice, as far as I’m concerned.

“Don’t be such a nag,” she said. “There is nothing worse than nagging a man. Be meek and humble.”

I don’t like that ‘meek and humble’ bit too much, until she clarified:

“A man will give you anything you want, if you’re sweet and don’t come screaming, demanding and hollering at him all the time. You gotta know how to work a man.”

She took another sip of her drink, rolled her eyes authoritatively and we all broke into applause.

Forty minutes later, I went to a gun club to finish celebrating my birth. I did a pretty good job hitting the target too. Who says you can’t mix guns and alcohol?

*Tip: If you’re looking for a great venue to have a girl’s night out or just a nice date place, take a departure from Outback or the bowling alley and check out WineShoe http://wineshoeatlanta.com/gallery/. Tell ‘em  Sheeda sent ya.