I'm super geeked to launch my new Mind of Malaka STORE! Check out my latest products and creations!
Uncategorized

“You guys should do township tours as a family. A day spent with you, and our teen birth rates would go waayyy down.” – Michael L.

Yesterday we went to Sedgefield Market on the N2 with our missionary compatriots. Marshall and I are the only ones with kids. Everyone else in the group is a carefree single just a-servin’ the Lord with a spring in their step and while viewing the world with rose colored glasses firmly fixed to their frown-free faces.

It was a lovely winter day. There wasn’t a cloud in the sky and it was warm enough to walk around in short sleeves and sandals. The market had every sort of vendor imaginable and we took our time browsing and sampling the homemade fare that the vendors had come to sell. Well, our friends did. Marshall and I spent the morning trying to keep the children from destroying the tranquility of the bazaar. For the most part we did okay. The children were compliant, even somewhat agreeable – up until “The Scene”, which comprised of a cascading series of unfortunate events that came in waves so violent that it was hard to keep up.

As we sat down to breakfast on tree stumps serving as stools, Aya announced that she wanted a hotdog for her meal. Not one to pass up meat, I said I would have one too. Nadjah had been lustfully eyeing everyone else’s English breakfast before finally announcing that she wanted a plate of bacon. I have her R20.

“Make sure you bring back my change.”

She returned with a yoghurt parfait.

“Where’s the bacon?” I asked incredulously.

“Oh. I decided to get something healthy instead,” she answered simply.

What?? Three bucks for a yoghurt parfait? What a rip off. I let it go though. It was a beautiful day, and there was no point in getting upset. That is, until Nadjah took two bites and refused to eat any more.

“You better eat all that yogurt,” Marshall said darkly. “This whole meal cost me 2 hours of work!”

In that moment, I heard a yelp of protest. Stone, who had been uncharacteristically quiet, was suddenly throwing fist-fulls of wood chips and dirt into Michelle’s blond hair and bosom.

Just then, Brittany broke into a rowdy cackle at the other end of the table. I turned my attention to find out what was amusing her so much. Nadjah, as it turned out, had abandoned her parfait altogether and was begging bacon off two elderly male strangers who were about to feed their left-overs to their dog.

In the corner of my eye I caught Aya quietly smearing ketchup all over her face and wiping the excess onto her trousers. Just as I was about to admonish her by telling her for the billionth time to use a napkin, I heard Liya walk behind me, contentedly singing in her sweet toddler speech.

What was that in her hand? She was waving something blue that made a crinkling sound as she clenched and unclenched her fist. Oh dear God. It was one of my sanitary towels.

I hardly knew where to begin. Should I grab the Always pad from the baby, wipe the mud from Stone’s hand, give Nadjah a lesson on begging food off strangers before nagging Aya about dirtying herself with condiments yet again? What was the proper order?! Defeated, I hung my head and waited for it all to pass, which by some miracle it did. 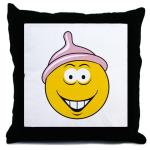 After the storm subsided, it was suggested that we consider bringing teen girls into our home to see what a life of parenting really looked like. 5 minutes with some inexperienced knucklehead surely couldn’t be worth all this.

“You guys are walking prophylactics,” Michael declared, handing Liya back to me. He didn’t say it, but I wager he may never, ever have kids. Ever.

Oh Michael, I wanted to say. You don’t even know the half of it. Until you’ve found yourself half- naked on a tin roof during a raging lightning storm because you’re trying to break back into your house after your kids have locked you out…Today was pretty tame.