“Do you want to go to Prince’s house?”

My breath caught in my throat on that crisp, rainy season day. I felt my eyes involuntarily fly open and morph into a pair brown half-dollars.

My mother trusted Emefa. She was one of the few girls in my primary school who never left her house beyond being sent to the market to buy tomatoes, okro and rice for her mother. It was such a shame, keeping a girl cooped up in the house like that. And now Emefa’s mother had relented and allowed her to come over to our house and play. Seeing the chance to give Emefa a bit of freedom, my mother allowed us to go, telling us not to stay out too long.  “Too long”, was never properly defined in my house. It could have been 10 minutes or two hours, depending on the instructing parent’s mood that day. I decided to be cautious and said we’d be back in half an hour.

“Prince lives just here,” Emefa said in her grating, rusty voice. “His house is very nice. One time, the watch man asked me to buy groundnuts for him and I saw the inside of his compound.”

I grunted in reply and skipped over to pluck a low hanging hibiscus leaf from a nearby bush to place in my cornrows. It wouldn’t fit. I cast it off and desperately tried to brush yellow pollen out of my hair. My sister – whom my mother had insisted come along with us – laughed and pointed mockingly at me. I told her to shut up, annoyed by her presence. How was I expected to flirt with my annoying little sister around? Everyone knew I had a third grade crush on Prince. All the girls did. He was the only light skinned boy in our class, and in 1989, light skin was all that a boy needed to attract legions of adoring admirers. Emefa was still talking.

“When his mother saw me, she invited me into the house for a mineral (soft drink). She’s so beautiful.”

“I’ll bet she is,” I murmured. After all, her son was beautiful too…

“She was Miss Ghana, before she became a mum,” Emefa informed me just before we turned the corner to Prince’s gate. She waved at the watchman who had spied us from his wooden bench.

“Brah Kofi, good afternoon,” she said with a curtsey. “Please, is Prince home?”

Brah Kofi giggled a silly sort of old man giggle and confirmed that the boy was home. He said he would call him for us, and instructed us to wait just there. I tried to peer into the compound, but Emefa, who was two inches taller than I, was blocking the view between me and the gate.

“Princeyyyy! Some beautiful ladies are here to see you!” Kofi sang.

We waited, and waited and waited, and finally, Prince came to the gate. He didn’t say a word. He just stood there, staring. I finally broke the silence.

“Hi, Prince! I didn’t know we were neighbors.” A stupid smiled spread across my face.

“Well… how are you? Have you done your homework?”

“Oh…” I was floundering, so I went in for the kill. “Can we come in your house?”

His reply was flat and final.

We stared at each other for a moment and then I turned to leave. I didn’t bother to say goodbye. Heat shot up my back and burned the tips of my ears. I was already half way down the road when I felt A-dub and Emefa run along beside me moments later. My sister was laughing at me again, and again, I instructed her to shut up.

My crush on Prince ended that day, and the focus of my imagination shifted to his mother. To be Miss Ghana, she had to be very beautiful indeed! All the Misses of every country were glamorous women with beautiful clothes and perfect hair. I couldn’t imagine what it was like to have the perfect mom. No wonder she never came to pick him from school. People would faint at the sight of her! Naturally, I decided I wanted to be Miss Ghana when I grew up. I told my father of my aspirations. He was outside the house, talking trash and drinking beer with my Uncle Peter.

My father chuckled and smirked when I gave him my mini speech about my future plans. Uncle Peter almost choked.

“Tweeaaaa! No. Please. You can’t become Miss Ghana,” he said. He sounded desperate.

“But, why not?” My heart was broken. Was it because I wasn’t pretty? Or maybe this pair of men thought I wasn’t smart, either… Why so little confidence in me?

“Because only prostitutes go for Miss Ghana,” my uncle said matter-of-factly. I wasn’t sure what a prostitute was at the time, but he said the word with such venom and disgust that I gathered it wasn’t a very nice profession.

I thought of Prince’s mother. Was she a prostitute? Is that why she never came to pick him from school? I felt so lost. I had lost my crush and my dream girl in one afternoon.

And that was Ghana’s legacy in the beauty/pageant world for a long time: only ‘prostitutes’, or girls or ill repute, or women with little education (or creativity/imagination/decorum) from extremely humble backgrounds competed for the of Miss Ghana.  Girls of my generation from a certain class would NEVER aspire to be Miss Ghana. In those days, we were not even proud to be Ghanaian. You couldn’t even sell Ghanaian rice to the upper class natives, and a t-shirt only had value if it was “Made in America”. How then were we of the Ghanaian bourgeoisie expected to use our parents’ hard earned cedis to represent a country that was on a continent that the world had nothing but pity for? Forget respect!

And so year after year, decade after decade, Ghana sent fiyanga girl after fiyanga girl to the Miss World pageant. Beautiful girls – yes – but girls who could barely string two words together in English. Girls who barely had a secondary school education. Girls with the memory of untreated jaundice haunting the whites of their eyes. Girls who were not confident in themselves, because they were neither confident in their country nor their country confident in them. In fact, when my friends and I would watch Miss World, we would immediate decide who our picks to win would be: Miss Thailand, Miss Iceland, Miss India… anybody but Miss Ghana. Miss Ghana was always just a mention at the beginning of the show with a short list of her credentials. She never made it to the semi-finals. 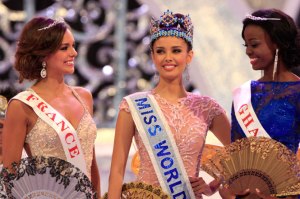 This is why Naa Okailey Shooter, second runner up in this years’ Miss World pageant is SUCH a huge deal. The 23 year old beauty queen is a fourth year medical student with definable aspirations. Each Miss World contestant brings a project from her native country as part of the Beauty With A Purpose campaign to generate awareness and fundraising.  For the following twelve months these projects become the focus for the newly-crowned Miss World, who will make visits and support the issues. Ms. Shooter’s project presentation on Buruli Ulcer, a disease that largely plagues children under age 16 in West Africa, placed in the top 10 list, a tremendous feat by all standards.

Recently, we’ve talked about colorism and its affects a lot here on M.O.M. and I have always advocated women being themselves. There is no greater merit to having pasty pale skin over coal tar black skin or vice versa; it’s merely the skin you were born in. Skin protects your blood vessels and is a sheet for your bones and organs. It’s just bloody skin!

All that is to say is that  I was ecstatic to see Naa Okailey Shooter  on that stage with the first runner up and the eventual Miss World (Miss Philippines) , in her natural glory. Her deep cocoa brown skin was glistening and her modest make up played up kind eyes and a bright smile. She had bucked the pressure to bleach her skin as most in the African entertainment world feel the need to do just to get ahead. (Did you know one of the effects of skin bleaching is that is makes your eyes look evil? Your skin is being flayed off, layer by layer. Why wouldn’t you slit your eyes in pain?!) Naa Okailey looks like a regular girl-next-door beauty, Ghana style.

The judges and the board of the Miss Ghana Pageant are to be commended for sending the right woman for the job, not just the one they think the world will accept based on her aesthetics and/or their own myopic views of what beauty is supposed to look like. As Naa Okailey said herself:

“I believe the definition of beauty has evolved and its essence is to impact life… and the lives of the less fortunate, especially children.”

I couldn’t be more pleased and more proud of Ms. Shooter, who represented Ghana with grace and dignity and poise. With her win (and it was certainly a historic one), she will give future contestants confidence as they step out on the world’s stage. And certainly, there will be more little Ghanaian girls sitting in front of the TV with their friends scrambling to claim the title of Miss Ghana for herself before her friends can and confidently predicting a win.

This article has 10 comments