There are all kinds of marriages: Marriages of convenience, polygamous marriages, arranged marriages, marriages to the gods. Some people even marry their pets. Today we’re going to focus on plain ol’ dull, hetero-normal, missionary position, “What do you want to eat for dinner, bae?” marriage…if that’s alright with you, dear Reader.

I like reading (certain) articles and posts about other people’s marriages. I realize that couples are not obliged to share the most intimate moments of their lives or dish out advice about what has given their relationship such longevity (or robbed it of it), so I am appreciative when they do. One article I read when hubby and I were still in the early days of our marriage stuck with me. I can’t remember the source or the author, but the husband was talking about ways in which he and his wife kept the spark alive in their marital union, now that they were the parents of small kids.

Everything’s better with a friend!

It has been scientifically proven that there is an inverse relationship between the perpetual presence of children in one’s home and sexual activity, and in order to overcome this calamity the couple in question developed a code to communicate the desire for spontaneous sex.

“Who wants to watch Barney?” his would ask in a sing-song voice, pausing in the middle of whatever she was doing.

“I do, I do!” their pre-school aged children would squeal.

Dad would then pop in the VHS and the couple would be guaranteed 20-30 minutes of undisturbed, sweaty intercourse. Everyone wins. 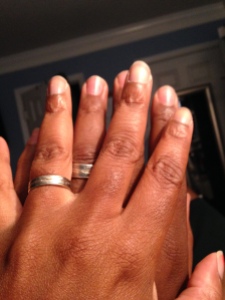 I thought it was SO COOL that this pair had created their own cipher to express their individual needs – something between just the two of them. I imagine that other couples do it as well. As Lord of The Rings and Star Trek fans, Marshall and I have developed our own marital code, which I will share with you now.

“Hey babe. You want to go to Deep Space Nine?”

“Oh. Hold on. You might have to wait until later. Shields are up, and we’re on red alert.”

“I’ll notify engineering. Would you like the replicator to get you some chocolate?”

See? We could have that conversation in front of the kids and no one gets mentally scarred for life.

We also have nonverbal and physical cues that we employ to convey an emotion. If Marshall does something he’s particularly proud of, he will assume this stance:

This aggressive crotch thrust says “I dominated over this obstacle. I made this problem my b!tch.”

In moments when my blood sugar is running low, I may request some elevenses after which some tasty num-nums will magically appear. 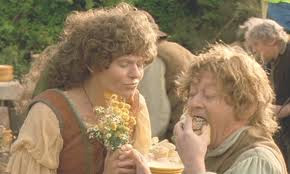 Codes and code switching are an integral part of human interaction. Minorities are often compelled to code switch when they want to get a job or decent customer service in any hospitality environment, and friends often develop codes between each other. MX5’s and my code for expressing a need to catch up on current events, for example, rests in a one word query: Coffee?

We’ve been hardwired to believe that marriage is hard and that it takes work to make it succeed. Often, this is interpreted as marriage being something to avoid. After all, “hard work” doesn’t translate as “fun”, does it? But since when does anything worth having and protecting come easy? Developing a unique set of marital codes takes dedication and work, and I’m pretty proud of the crotch thrust, high fantasy, pseudo geek/nerdy cues we’ve created together.

Now, if you’ll excuse me, I have to journey to Isengard and vanquish an ever present enemy. Never you mind what foe awaits me!

Have you developed any marital codes? Maybe you never plan on getting married, so have you developed codes with those closest to you? What genre inspires your codes? I bet you’re gonna go get you some codes now, huh? Yeah…I know.

Should I Explore Astral Sex with My Husband?