Note: They’re still inbred idiots – and I by no means AGREE with their fanciful depictions of what happened that fateful night – but I understand them… and that is the point. This post contains graphic images. Be warned.

There are some things that you just cannot unsee, no matter how hard you close your eyes or shake your head when an unpleasant vision suddenly creeps into your consciousness.

There was a time when my family wasn’t doing so well financially, so we cut back on a lot of things: spontaneous lunches out, excursions with the kids, and cable television. All these things went on the chopping block in order to live a more frugal life. None of them were true necessities anyway, so that year of ‘deprivation’ went by pretty quickly.

I did a lot in that year. I walked. I ate more fruit. I watched a lot of PBS. And one night, just by chance, I caught a documentary about American history. I have wracked my brain to remember the name of the documentary or at least who it was produced or narrated by, and I just CAN’T recall. I desperately want to tell you what it is so you can see what I saw. I can recall none of these things, but there is one thing I do remember and that was the picture of a lynching. 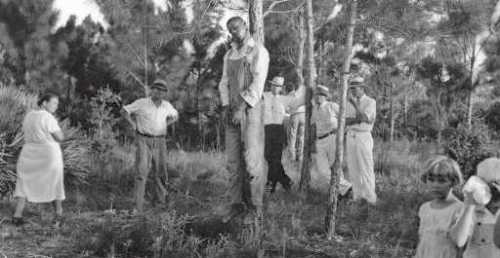 The lynching of Rubin Stacy

In some backwoods town somewhere in 19th century America, a group of White men stood smiling, waving their guns and nooses over the corpses of about a dozen or so Black men. I can’t remember what their ‘crime’ was; these dead Black men. In those days it could have been anything from looking at a White person in the wrong way to petty theft. There’s just no telling. I don’t remember all the details, I will admit, but the point of the story was that they had taken justice into their own hands because the sheriff was taking too long to do so. They subversively and promptly executed these men because it was ‘expedient’, I suppose.

However, upon closer inspection, it was discovered that the bodies heaped there were not all male. There was one woman, with wide, shocked doe eyes lying at the bottom of the pile, staring into the camera. In their shame, the vigilantes apparently dressed the woman as a man, placed her at the bottom of the pile, smiled for the picture, and hoped that nobody would notice.

But someone did… and they made a documentary about it… and that image has stuck with me ever since.

I’m not a man, but I know something of the male ego. There is always this struggle for dominance, and the need to triumph while simultaneously looking heroic in the midst of that struggle. No one likes it when you pick on the smallest kid in the class – which is why we abhor bullies and put boxers in the same weight class. A ‘real man’ doesn’t need an unfair advantage to win. An unfair advantage makes you look weak, and does not play well into the heroic narrative.

This is why George Zimmerman’s supporters have fought so hard to control and redirect the narrative about the night he encountered Trayvon. How can they look at themselves in the mirror and their children proudly in the eye, knowing that they support a child killer? The answer is, they can’t – which is why they NEED to paint Trayvon as something other than a child who was just coming home from buying candy on a rainy night.

My husband says I need to stop engaging in twitter conversations with the masses. It’s not constructive, and the majority of these people are idiots, he said. He is also concerned about the toll it takes on me. I am achingly empathic, to the point where I physically feel the pain of others in my own body. So last night, when I was engaged in a war of words and (dim) wits with four or more Zimmerman supports, I felt myself becoming drained.

“You’re right.  I should. I have work to do in the morning,” I replied. “This is a waste of time anyway.”

However, the conversation I had with these people did not leave my mind. Their assertions about Trayvon Martin were laughable at best, and delusional to say the least.

He was NO child.

Trayvon Martin was big and strong. He was 6’2”! 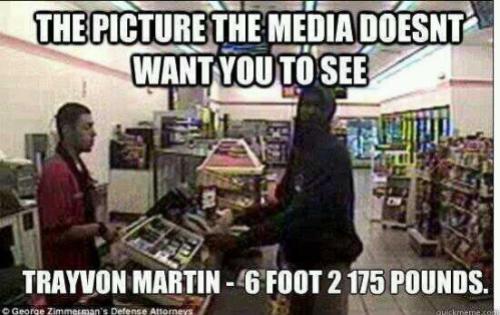 He was a gansta wanna be thug and he paid for his life with it.

The community was grateful to George Zimmerman because they were tired of the break-ins!

You’ve heard all assertions, I’m sure. There’s no need to go on. They get crazier as the days go by, anyway.

I had to ask myself “Why, why, why do these people keep talking absolute nonsense?” Trayvon Martin was 17 and neither old enough to legally drink or vote. According to the coroner, he was 5’11”, unless he magically grew and shrunk between the time he encountered Zimmerman and was fatally shot. Apparently, he had started putting in applications to colleges and wanted to study aeronautics. There aren’t too many ‘thugs’ with those aspirations. And finally, he was not breaking into anyone’s home that night – unless you believe that that was his intent and you also count a  can of sweet tea and a bag of candy as break in tools. I dunno. Maybe Trayvon could have launched the tea into a window like a grenade and distracted his target with Skittles.

Suddenly, the twitter conversations I was having were not so fruitless after all. When I remembered the eyes of that dead Black woman at the bottom of the pile, it dawned on me: They NEED Trayvon to be a thug, just like those vigilantes NEEDED that defenseless woman to be male. They NEED Trayvon to have been big and strong. They NEED him to be the aggressor in this instance. They NEED to feel that his murder was justifiable. 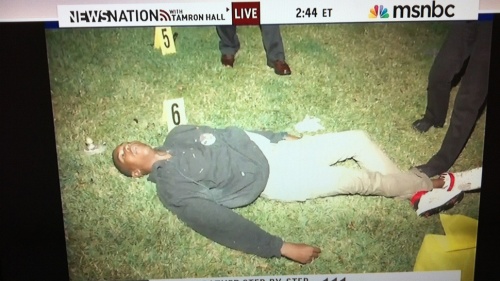 Look here, you “real Americans”. Get this into your thick skulls; a child in a hoodie doesn’t make him anymore a thug than tying a towel around your neck makes you Super Man.

You will have to live with your shame for your support of a child killer. A man with –unlike Trayvon Martin – a proven history of violence against women; a man whose prejudice was demonstrated through incessantly calling the police on Black teens in the area; and a man who faced termination from at least one job for failure to control his temper. Oh. And let’s not forget a man with the balls to lie under oath about his finances. Or is lying under oath now honorable to you lot?

You should all be proud of yourselves, you “real Americans”.

I understand who you are. Will there come a day when you understand yourselves?