(…or she may have been Wendy the Welder. I can’t ask her, because she’s dead.)

The years between 1939-1945 must have been an intoxicating time, fraught with uncertainty, new possibilities and loads of change. The Second World War had changed everything for Americans, and my Aunt Clara was not to be exempted from the alterations that the global conflict would bring.

Almost everyone is familiar with the image of Rosie the Riveter, the cultural icon representing the American women who worked in factories and shipyards during WW II. It was drawn by Norman Rockwell, who gained mass appeal because of his whimsical (and detailed) depictions of American culture and life. A singular glance at Rosie elicits several emotions (and assumptions) about the type of woman called to serve her country in its greatest hour of need: Young, confident, brave, selfless and of course, strong. This being America and it being the multicultural and racially diverse country that it is, it cannot escape notice that Rosie the Riveter is white. A white woman was chosen to embody all the attributes needed to fill a void created when all able-bodied American men were called off to war. It therefore wasn’t hard for me to make the leap as a child (and admittedly, as a grown woman) that white women exclusively worked in artillery and machine production factories across the country in the service of the war effort. 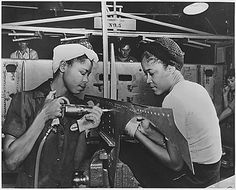 My assumption has been that during that era, Black women were most likely serving as maids or still in semi-bondage on tobacco and cotton fields, and certainly would not (be able to) answer the patriotic call to duty to work in manufacturing in the war effort. So you can imagine my surprise when I recently discovered that my Aunt Clara was an employee at an industrial plant that manufactured airplanes during WWII!

To look at Aunt Clara (who passed away in her 70s in the late 1990s), you would never guess she had ever been anything but a demure housewife whose sole goal was to attend to the needs of my cantankerous Uncle Clarence. As for as I know, she never made any demands of Uncle Clarence, save one: she did not like the name “Clarence”, so she would call him “Johnny”. Everyone referred to him as Johnny from that day forward. My memories of Aunt Clara include her moving slowly around the kitchen making pots of greens, dispensing Uncle Johnny’s meds and wheeling the miserable old man around in his chair at his frequent request. Nevertheless, she smiled easily and had a warm bosom that made for excellent snuggles.

When we were in Detroit this summer, it was my Aunt Cynthia (Clara’s daughter), who casually mentioned that her mother used to work in an industrial plant. I have never known much about that side of the family, and now that I was old enough to ask questions and receive honest answers, I hopped on the opportunity.

“When I was a baby, my mother left West Virginia to come to Columbus, Ohio to work. I used to sleep in a tin wash basin with a pillow in the bottom. I don’t even remember it. Anyway, she used to work making them big airplanes for the war.”

I was intrigued and was motivated to do a little research. As far as I piece together and based on the few facts she provided, Aunt Clara most likely worked at Curtiss-Wright, which became the largest aircraft manufacturer in the United States by the end of WWII. Women worked on all points of the assembly line, starting from cutting and sewing the upholstery for seats, to welding the sides and panels of the aircraft together, to finally testing the integrity of the aircraft. Oftentimes, they worked in racially integrated teams per a federal order. I frequently find myself wondering how many good friends women like my aunt made on the assembly line – and consequently lost – when the war ended and life was expected to resume to “normal” with men returning from the battle front to work and women to their kitchens and parlors. It would also mean a return to strictly governed/divided racial interactions in public, especially in the South. I imagine that the memory of working and eating alongside a woman whom you were previously forbidden to by law never really fades.

Stories like this are not told often enough…not in film, not in literature, not even amongst ourselves at family gatherings. When men, closer wedded to the privileges of patriarchy than good sense, puff out their chests and spout off about the “natural order of things” – how men are meant to provide and women are meant to wait meekly for their rations – it makes me want to puke bile. Clearly, as situations such WWII, the Asante-British war of 1900-1 (led by Yaa Asantewa), or as far back as 1588 when the Spanish Armada was defeated by the English under Queen Elizabeth’s leadership, or countless other lesser known events demonstrate, women have as much a mind and ability for defense, tactical planning, engineering, construction and execution as any man; Because women are human.

I wrote a post earlier today about the abysmal soon-to-be-released pop-tart movie called Jem, and how disgusted I am that it stripped the title character of all her agency and power as a young woman. (The film’s creators even embodied her as a waifish teen – and not a woman closer to her 20s – to ensure that the very notion was ensconced in the viewer’s psyche.) There is no hope for that particular film, but the message needs a strong contradiction, also set to film. It’s my sincere hope that a film maker/storyteller will see it as necessary to tell the story of all the Black, Irish, Polish – American – Rosie Riveters and Wendy Welders who served this country when it needed the strength of those women the most. I believe it’s as essential a task as the making of Wind Talkers, Red Tails or Glory. I believe it is vital.

The Mercy of Teachers Who Embrace Failure