I can’t believe I’m about to write this…but what they hey. Carpe dat diem.

My Dearest Excellency JDM| President of the Fourth Republic| Father of a disputed number of children| Dead Goat | “You Mean As a Human Being?” Asker| Charmer of panties off Real Housewives of Atlanta.

I know I haven’t hollered at you in a while, but when NDC foot soldiers threaten your family, it kinda makes you sit back and reevaluate all the things you once believe about Ghanaian decency and integrity…and intelligence, quite frankly. But whatevs. I’ve got some stuff I have to say – some stuff you koraaa, you know in your own heart yourself.

Before we get into any heavy lifting, I want to offer you my condolences for the loss of your mother. I know that the bond between mother and son is one of the strongest known to man, and I’m sure she was very proud to see her baby boy rise to the highest position in the land. I was really happy to see that the opposition allowed you to mourn in peace without resorting to barbaric tactics like making wild accusations that you killed your mother ahead of the elections to garner the sympathy vote. With how crass politicians of all stripes are in Ghana, I wouldn’t have put it past them. In terms of conduct, the run of the mill Ghanaian politician circa 2016 has the appeal of the underbelly of a sewer serpent a quality that serves the nation poorly. I hope in your next term as president, you will call for more circumspection among your ministers.

Oh? You’re surprised to hear me admit AND congratulate you for winning the 2016 election? Why should you be? We all know that your party will win…not that y’all deserve to. It’s not fair, but it’s life. At 2pm today, there is a woman in Asia today that’s going to abort her female fetus because she just got paid and girl children are “useless” in provinces all over Asia. That girl fetus ain’t deserve to die, but it powerless to stop it, isn’t it? You are the Asian mother and the Ghanaian public are the fetus. There’s nothing we can do but wait and see if the abortionists – in this case, a metaphor for your cabinet – are going to destroy us with forceps or fire. We live to see.

So, about your ministers. Dude. You GOTS to call these people to order!

I once said that like George Bush, yours is the public face of private failures. Did George Bush ruin America in a vacuum? All by his little self? Absolutely not. There were all kinds of departments and agencies and individuals behind the scenes responsible for the messes that were made of American lives. Likewise, every time the lights go off, or a child dies in a hospital that has no beds or the stench of a rotting lagoon washes over the population, we blame John Mahama. Not John D. Mahama the man, per se, but what he represents…which is failure, incompetence, and corruption. But you know what? I’m about to admit something that I never thought I would…or could.

Maybe, Mr. Mahama, MAYBE none of this is your fault. Maybe the people who you’ve surrounded yourself with won’t LET you be great. Maybe you’re not strong enough to buck against the political machine that has ruled and ruined Ghana since we became a democracy.

This notion was confirmed when I – nay the WORLD- saw the top brass in the NDC signing a petition to compel you to invoke article 72 and press for the release of 3 radio presenters who threatened to rape, murder and maim our nation’s Supreme Court Justices. However, I first realized it when Hannah Tetteh inadvertently revealed that she don’t know what’s going on in the presidency and vice versa.

Remember the early days of #BringBackOurGirls? Remember how distraught many Ghanaians were that you – our nation’s leader – had not reached out to Nigerians to commiserate with them and share in their heartbreak? Hannah told us on twitter that it didn’t work that way…that the president couldn’t just release public statements like this and that you MIGHT in due time. But then, what did we see a few days later? I’ll tell you what! It was an article on Ghanaweb that announced that you in fact ALREADY had written a letter of condolence and support to Nigeria’s president, and showed us that it was dated in early May 2014. It was then that I knew that your ministers don’t know what you’re up to and you’re just as blind to their activities. 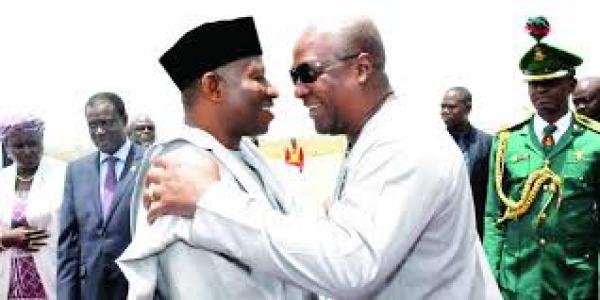 Like no. Look at the Oye Lithurs. You got Tony up in your office telling you NOT to jeopardize your legacy, the perception that Ghana is indeed a place that operates under the rule of law and the integrity of the presidency by invoking Article 72 for the benefit of three radio hoodlums. Right? And then what is his wife busy doing? Signing petitions to compel you to do that very thing! What madness is this? I wonder how dinner went at their house that night…

“Nana! You’re tripping! Have you taken leave of your senses? Have you forgotten your duty to uphold the law?”

“Tony! You’ve got to understand! It’s just ONE woman’s sexual assault we’re talking about. We have to think of the PARTY first!”

“My God, woman. What is wrong with you?”

“I’m feeling good. AND, I’ll have you know I lost an additional 10 lbs on the SlimFast plan today. You wanna have sex?”

“Well…yeah. I guess. Since you’re looking all good…”

And then Tony Oye Lithur puts his Lithurlettes in Nana Oye Lithur…or he puts them in a bag. I don’t know how old folks handle their contraceptive business. All I DO KNOW for sure is that you, my president, are left holding that bag. That’s right. Tony and Nana (and Valerie and Hannah) get to get off, skeet their perverse pleasure and you have a slippery, gushy mess on your literal and figurative hands.

Your ministers don’t respect you. They never should have put you in this position. Just like dumsor. I’m now certain that you gave a bunch of money and power to someone who was supposed to fix this crisis, someone who you trusted to deliver on time and who in turn promised you they would, and summarily failed. And why weren’t they scared to fail? Because it’s not their face and legacy on the line. It’s John D. Mahama’s. History will judge you, not them.

Sir, I went to Ghana International School, so I know a little bit about sabotage. Them kids are ruthless and will not hesitate to destroy your reputation through words and deeds. I see it from where I sit, and so should you: There should be no doubt in your mind that you are surrounded by people who do not have your best interest at heart. You know whose interest they are looking after? NDC foot soldiers.

Propagandists, in a country where education is crap and theory of knowledge is a luxury, bring votes.

And who gets those votes? Your ministers…who have the gall to sit at Flag Staff house and mock the citizenry who protest for clean water, a living wage (or wages in arrears) and employment.

They get to retire in cozy, off the grid houses in the Volta region, while history will have written down as a clueless buffoon who couldn’t solution his way out of a polythene bag.

I had so much hope for you, John. I remember when you were VP and were featured in a documentary about plastic and its negative impact on our environment. I said “Here’s a man that gets it! If he were ever president, he’d FIX this.” Instead? Ghana’s environmental issues got worse and is now labeled as the 7th most polluted country in the world.

Your MPs should be shielding you from harm, not driving the bus that is going to roll over you. You need to have a come to Jesus and the ancestors meeting with them. I want you to succeed, because I want GHANA to succeed. NDC ideology doesn’t mean jack spit in a nation where folks can’t afford 3 meals a day and kids are graduating high school reading at a second grade level. Where politicians can’t reason and have to resort to violence to settle scores and differences. Where is the reason in pressuring the president to pardon three anarchists because 3 months in jail is “too harsh”? Could that perception of harshness have anything to do with the fact that Ghana’s prisons are squalid hellscapes that violate human rights provisions? Did you see Seth Kwame Boateng’s “Left to Rot?” I know you have a lot on your plate, but it’s worth knowing that this is the sort of cancer your government is presiding over.

Anyway, I gotta run now. They are reading the results of SA elections and it looks like the DA is taking over, much to the ANC’s chagrin.

Have a great weekend and have that talk with your people before the elections, wai? Don’t let them treat you like Nigerian jollof. You are GHANA jollof, demmit. No one deserves to be treated this way.